Does your cat play with string? *Graphic photos attached**

By Lifelearn Admin January 9, 2020 No Comments

Does your cat play with string? Read about poor Loki’s experience with swallowing a string and you may ban strings from your home!

Please be aware we have added pictures of Loki’s surgery at the bottom of the page, that are graphic images.

Beautiful Loki presented with a history of not eating, vomiting, and feeling very lethargic.  Blood work was relatively unremarkable. X-rays suggested that his intestines were bunched together in an unusual pattern.

Dr. Barb was able to perform an abdominal ultrasound.  The results were definitive. Loki had what we call a “linear foreign body”  This is when the end of a long object such as a string gets stuck somewhere along the intestinal tract. The string then acts just like a drawstring and bunches the intestines up around it.  It is often very difficult to diagnose because stomach contents may continue to pass through the intestinal tract so the patient often does not get as sick as if they have a complete obstruction. Linear foreign bodies are extremely dangerous because the string will saw its way right through the tender intestinal tissue until it perforates the intestine.

The team at Gateway jumped into action, getting Loki on IV fluids and pain control immediately. Dr. Stephanie took him to surgery with technician Krissie handling the difficult anesthetic like the pro that she is.  It turns out that Loki had a long string that was looped around the base of his tongue, went down his esophagus, through his stomach, and all the way through 75% of his small intestine.  Everything was bunched up like a drawstring bag.  Poor Loki’s abdomen was full of intestinal fluid from punctured intestines.  This was bad…really bad.

Dr. Nina cut the string under Loki’s tongue, and released the “anchor”.  Dr. Stephanie carefully pulled the string out of the small intestine and unfurled the whole mess.  There were 16 different holes in Loki’s small intestines. His intestines required more than 100 stitches. His abdomen was flushed and flushed and flushed with sterile saline, and the fluid suctioned out.  His belly was closed up, and he was placed on antibiotics and painkillers.

Then we crossed our fingers…and our toes.

Cats are amazing!  A few weeks later, Loki is doing great! Hopefully he has learned his lesson about the dangers of playing with string! 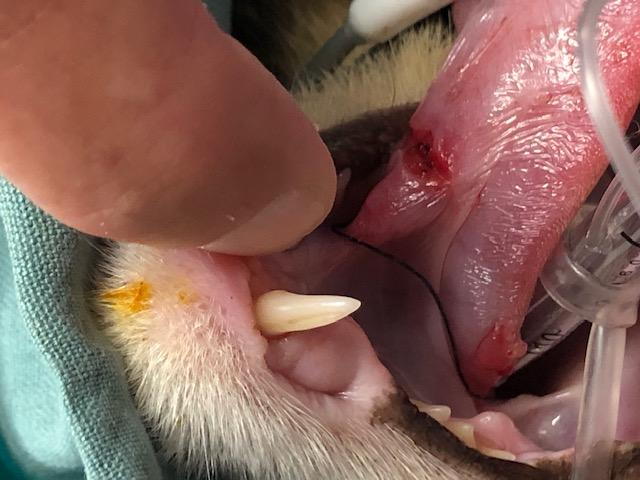 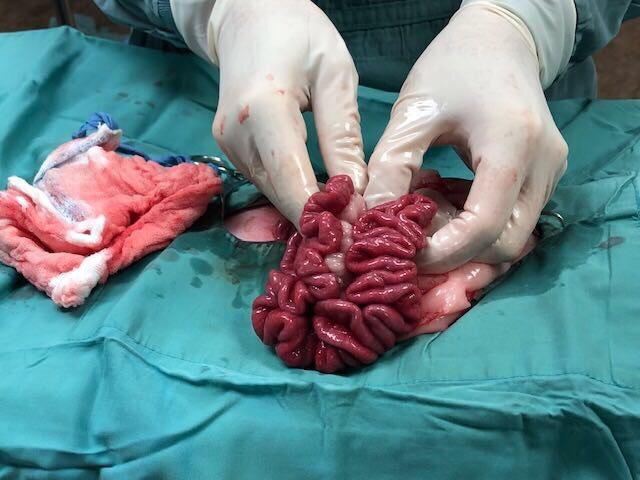 Here you can see the result of the string causing what was described as a “draw string bag, bunched up” 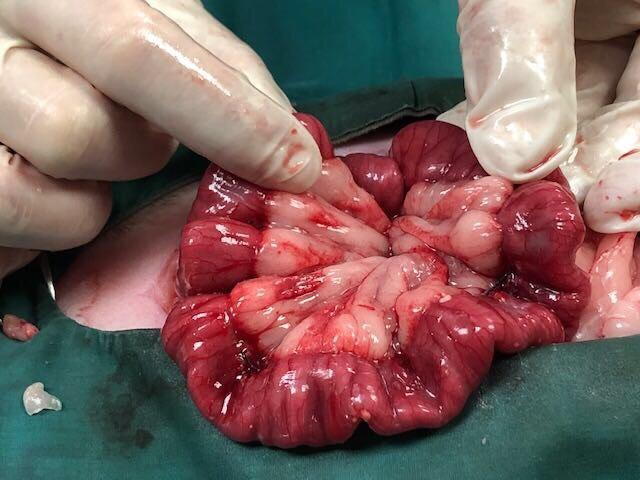 In this photo if you look closely you can see the string throughout the intestine.

Have a Question? Need to book an appointment?

Connect with us and one of our team members will be happy to assist you.